Zammaikins are unique instrument made by a master metalsmith Tomoaki Kawakami in Ishikawa Pref., Japan. Kawakami produce them only in winter season. His chance meeting with a shaman in Balinese Island lead to their creation. “Zammai” is Japanese phonic translation from Sanskrit “Samadhi,” which means “state of complete stillness of one’s mind.”
Using pure titanium or iron, each and every one of them are handcrafted by Kawakami with care. Zammaikins’ cosmic vibration attracts people’s fascination.

Chigusa, a Samadhibowl player from Japan, has been playing the Japanese originated spiritual instruments. Samadhibowl is Unique metal percussion instrument made of iron/ pure titanium, created by Mr. Tomoaki Kawakami, a Japanese smithy based in Ishikawa prefecture, Japan. Kawakami got the inspiration to create this special instrument from the offhand remark of a shaman whom he had met in Bali. As Zanmaikin is manually produced, piece by piece at Kawakami’s studio in Ishikawa, every single piece owns a different tone.

for YOGA and Meditation
for Good sleep

by tuning fork of solfeggio ratio and Samadhibowls

“analemma” is an astronomy term, a curve that emerges when you observe the position of the sun at the same time from a specific place on the Earth for a year.It occurs due to the Earth’s axis being tilted by 23.4 agrees against its revolution.

Masanori Higashikawa shot the cover photo in Kagawa, Japan, in 2009. The idea of this CD came to me when I saw this photo at an exhibition on the night of a summer festival in 2012.

In addition to the Solfeggio Tuning Forks, I play Solar System Planet Tuning Forks with the exquisite bass tone and Brain Tuning Forks, so that the combination of them would immerse you in a variety of frequencies. Also, you can hear the blissful sound of an original titanium instrument called Zanmaikin (Samadhi Bowls) made by a master metalsmith Mr. Kawakami from Ishikawa, Japan.

“musica foglia – Fantasy Cinematic Music Anthology” is a soundtrack for a fictitious movie. The music is performed by playing the Zanmaikin (Samadhi Bowls). Sometimes I have mysterious dreams.  They take place in a world that is a little different from the world we think of as reality. I see sceneries and people that I have never encountered before, or I just stand in the light, communicating with other unseen beings without words. I’m not sure if those dreams are about other dimensional worlds, parallel universes, or memories from the distant past. As I was remembering and compiling those dreams that left me with strong impressions, it made sense as a continuous story with moving images, and eventually, that became my fictitious film, mugica foglia. I wanted to express the world of “Musica Foglia” with my go-to instrument — the Zanmaikin — and that’s how I started this album. *musica means music. foglia means leaf. Zanmaikin is an original instrument made by a master metalsmith Tomoaki Kawakami from Ishikawa, Japan. I have heard that iron Zanmaikin hold earthy frequencies and titanium ones have cosmic ones.

Inspiration came to Chigusa Fukushima, a Zanmaikin (Samadhi Bowls) player. It was a story about this world being spun within the Zen Dragon, a shimmering pearl dragon’s dreams. Chigusa made the impression into a CD with a fantasy-like soundscape of Zanmaikin.

Zanmaikin is an original instrument made only in the winter season by master metalsmith Tomoaki Kawakami in Ishikawa, Japan. Zanmai is a phonetic translation of Sanskrit samadhi, which means “a state of completely still mind.” The cosmic sound of the Zanmaikin, which is handmade from pure titanium or iron, attracts many people both in Japan and abroad.

The moment she saw the instrument in 2012, she fell in love with its vibration and she has played them ever since.

This CD contains seven songs recorded in New York City, the city that Chigusa likes the most. Between 2017 to 2020, Chigusa began a new journey in her life and was going through her transformation of body, mind and spirit. From the beginning of 2020 onward, she experienced several significant events as the Earth was affected by the pandemic. Chigusa recorded “Gate” and “Eternal Dream” right before the COVID-19 outbreak. 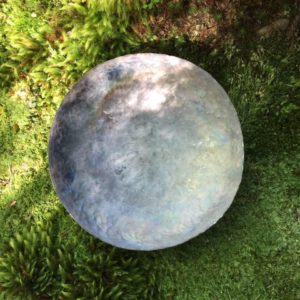